Managed IoT Cloud (MIC) is a secure cloud platform for device and data management that generates valuable and useful insights about your connected products. It provides the building blocks you need to connect your product, collect and store all product data, and extract value and insights from that data. It includes a self-service tool and a customizable application to get you started quickly, and when your digital service starts to grow, Managed IoT Cloud scales with you, globally. Telenor Connexion cooperates with device and application partners to provide a complete end-to-end solution for your digital services. Business relations with the partners are solely established by you based on your needs.

The Connector is an optional software component that runs on the Thing and simplifies connecting Things to the cloud. The Connector is delivered as a binary library with header files for a selected number of targets. The software base is ANSI C99 making it extremely portable, most of the time the modification needed to support a new HW target is mapping the I/Os and developing a modem driver if one is not already available for the selected modem.

When the connector is adapted to support a new HW target, there is usually already an existing code base for handling all of the application functionality.
The connector only adds the cloud connectivity and a resource repository.
For a limited number of targets, based on the NXP Kinetis K64 platform, there is additional functionality. More specific, the connector has a complete support for all of the HW functions of a barebone 3GGV02 supplied by JEMAC, and supports all of the HW functions of the 3GGV03 that are present on the 3GGV02 target.
This makes the 3GGV02 and 3GGV03 suitable for projects where no HW is already chosen and the requirements of the application in regards to HW interfaces etc. are met by these.

Getting started with the Connector

Before getting going with using the Connector on any of the HW targets, Things need to be created as well as Passports. A complete walkthrough how to create things and download their Certificates and private keys is available here MIC App Board User Guide

The Passport concept and how to provision a Passport

When creating a thing in MIC, certificates and private keys are automatically created and provided for download as a .zip-file. The Connector uses something called a Passport which is a way of provisioning IoT-Endpoint, thingId, Certificate, root CA and Private key as a single file.

Unzip the file and make sure that the following files are present in the same folder as all the folders containing the credentials of the things. These files will be provided on request.

The MakePassport.bat-file contains an IoT Endpoint that is generic, preferably it should be modified and the generic endpoint should be replaced with the value of the IotEndpointATS-key from the Manifest of the stack. The ATS-Endpoint for the Demo-stack (a1ek3lbmx2jfb9-ats.iot.eu-west-1.amazonaws.com) is in the .bat file currently distributed.

(yes, a space at the end) 5. Use Coolterm menu alternative Connection -> Send String (CTRL-T) to add a send string

(There should be a new line after the text) 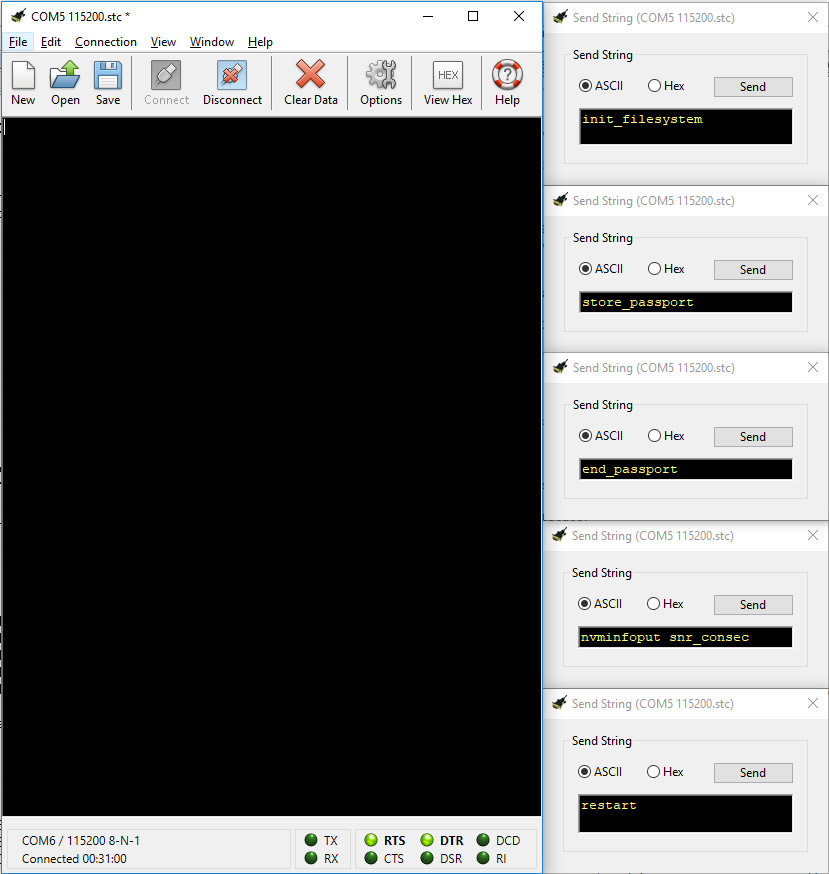 Developing with the Connector Library

When developing with the Connector Library there are a few things that may be good to know to get started easily.

For these targets, the functions in the table below will be the most likely to be used by the application:

When developing for these targets, there are a much bigger set of functions that will be used by the application. These are all documentet in the Doxygen documentation

The Connector library is supplied as a .zip-file. The contents of the zip-file should be placed in the root of the o: drive. When unpacked it should look similar to this: 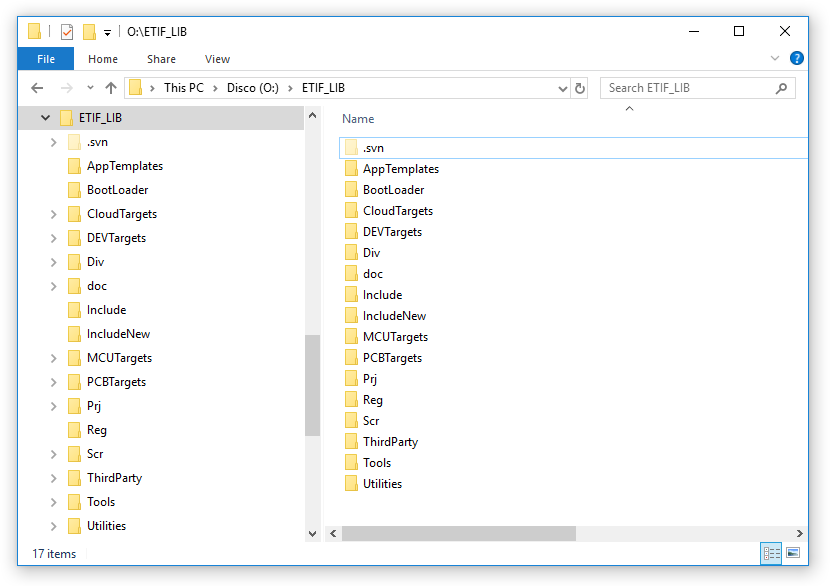 The .svn folder is present when using SVN for version handling.

A Doxygen generated documentation of the ETIF Framework can be found in O:\ETIF_LIB\doc\html Please refer to this if any of the functions used in the source walkthrough below needs more explanation.

The currently used version of IAR EWB is 7.40.3.8938 No special considerations needed when installing, but make sure that using the correct version.

KSDK is the Kinetis Software Development Kit supplied by NXP. The current version of the KSDK used by the Connector is 1.1.0 and it should be installed to c:\Freescale The KSDK can be found at NXP - Kinetis SDK 1.1.0 Mainline - Windows.

Using the ETIF_NewApp_MIC.bat-file for setting up an example project 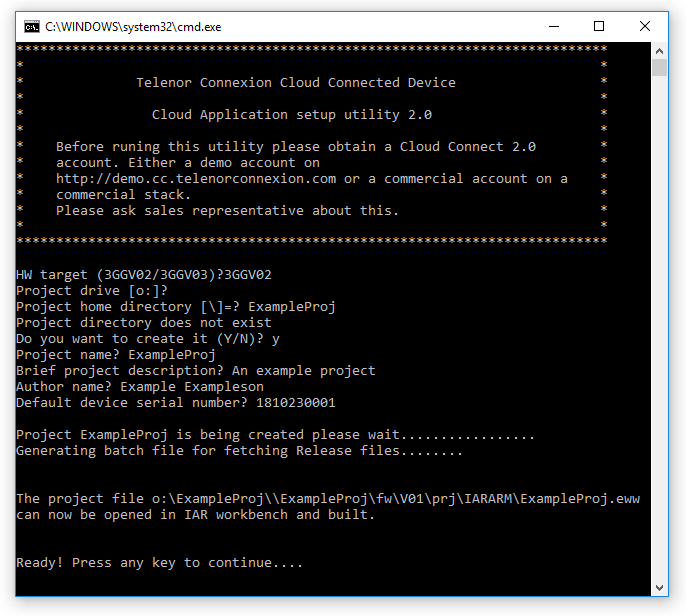 Please note that the ETIF_TestSuiteFramework is built for the purpose of sequentially testing all the features of the ETIF.
Among other things, macros has been added to facilitate easily adding more test cases to be run in sequence.
These test cases are in fact normal subthreads but they are added to the application in a different way.
A simpler “typical use case” will be added to compliment the project and source code in ETIF_TestSuiteFramework.

In this section, the source code of the main thread in a number of ETIF_TestSuiteFramework test cases are gone through. The code examples are available as is and functioned with no issues as of October 24th 2018. Only the sections of the code relevant to the walkthrough of the different functionalities are shown here, for the complete code for each section, a link to the raw source code file, in the state it was October 24th 2018, is provided.

How to check if there is a SIM-card installed

In this snippet, the software waits for the ICCID-information to be updated by the cellular modem. When the modem has updated this information, the result is printed, and since this is /source code for a test suite, the test result is saved.

How to check if unit can register to home network

This test is based on using the ETIF Flag functionality to set flags in the Network Event handler. The flags are added in the ETIF_AppRegistry.h-file and are set by the Event_NetWorkStatus - Network event handler in ETIF_TestSuiteFramework.c.

How to check if unit can attach to Packet service

This test is based on using the ETIF Flag functionality to set flags in the Network Event handler. The flag is added in the ETIF_AppRegistry.h-file and set by the Event_NetWorkStatus - Network event handler in ETIF_TestSuiteFramework.c.

How to check for Cloud Connect 2 Passport

This test uses passport handling functionality to check if there is a valid passport available in the file system.

How to Check connection to cloud

This test is based on using the ETIF Flag functionality to set flags in the Network Event handler. The flag is added in the ETIF_AppRegistry.h-file and set by the Event_NetWorkStatus - Network event handler in ETIF_TestSuiteFramework.c.

In order for being able to use the DAC. the ADC and DAC source code needs to be added, either by adding the c-file to your project or by including the c-file directly in the /source:

Then, the adc_dac_device_config() function needs to be called to complete calibration etc.

How to set the DAC

How to read an ADC

Below, one of the ADC differential pairs are read. What input is read differs depending on what HW is used and how any multiplexers on the board are set.

The macros availiable to read the diff pairs are these:
The logic of the naming is based on the input configuration for the 3GGV02 HW.

In this section examples of how to do file up and download.
Each operation needs an eventhandler capable of handling events of the tEtifResourceEventCommands type. The event handlers look a little bit different depending on if an upload or a download is in progress.
In the test code, the file in which the test progress is stored is first uploaded in it´s current state, and then downloaded and compared to the original file. This process is repeated three times, to make sure that the process is stable.

How to upload a file

A typical event handler for this kind of operation looks like this:

The code below shows how to start the file upload and some extra checks and controls for safety.

A typical event handler for this kind of operation looks like this:

The code below shows how to start the file download and some extra checks and controls for safety.

Raw ETIF_TestGPS.c In this section some GPS functionaliy is described

How to open and close the GPS Stream

To open the GPS-stream all that has to be done is to provide a handle and the uri-prefix of cellular.gps://.
To handle events on the stream a stream event handler must be provided. Open:

Raw ETIF_TestLAN.c In this section, it is shown how to open and handle a local LAN socket.

How to open and close a local socket

To open a LAN-socket all that has to be done is to provide a handle, the uri-prefix of ethernet.tcp:// followed by the ip and port.
To handle events on the stream a stream event handler must be provided.

How to send data on socket

Raw ETIF_TestMISC.c In this section it is shown how to trigger a user reset. The tests also tests that the watchdog timer is functional and the built in functionality for setting the RTC at connection time is functional.

How to do a user reset

How to store value in non volatile configuration

How to read value from non volatile configuration

Raw ETIF_TestProxy.c In this section example usage of the MQTT Proxy is shown

How to open the MQTT-Proxy stream

How to send data to proxy topic

Raw ETIF_TestRESOURCE_THRESHOLDS.c In this section the effect of resource thresholds are explained. Using flags set in the resourceEventHandler for the resources used for the test, the test cases are built. The threshold is set when registering the resource in the ETIF_AppRegistry.h-file

Raw ETIF_TestSERIAL.c In this section some serial stream functionality is in focus

How to open an RS232 stream

When opening a an RS232 stream, the stream uri needs to contain serial://uart2,followed by the serial parameters in this order: bps, number of databits, number of stopbits, parity.
The choices for parity is n/N = none, o/O = Odd or e/E = Even.

How to open an RS485 stream

When opening a an RS485 stream, the stream uri needs to contain serial://uart0,followed by the serial parameters in this order: bps, number of databits, number of stopbits, parity.
The choices for parity is n/N = none, o/O = Odd or e/E = Even.

To suspend the resource handler, the function ETIF_ResourceHandlerSuspend() is called. The application can consider the Resource Handler / Cloud Connection to be suspended when the flag CLOUD_RESOURCE_HANDLER_DISSABLED has been set and the flag CLOUD_CONNECTED is no longer set.

To resume the resource handler, the function ETIF_ResourceHandlerResume() is called. The application can consider the Resource Handler / Cloud Connection to be resume/enabled when the flag CLOUD_RESOURCE_HANDLER_DISSABLED has been cleared and the flag CLOUD_CONNECTED has been set.

In ETIF, there is functionality to catch different types of thread misbehaviour. When a thread finishes in a way that it is not supposed to finish, some cleaning up may be needed to avoid running out of resources like timers and memory.
In this section this functionality is explained and exemplified.

Raw ETIF_TestSuspendResume.c If a thread does not finish it´s tasks within an alotted timeframe, it can be made to timeout.
In this section it is shown how to setup the timeout and how to clean up the thread in case of a timeout.

Raw ETIF_TestThreadCtrlAbortCatch.c
Raw ETIF_TestThreadCtrlTimeoutChildBlocking.c
A thread may be aborted by the parent thread if the applications requires this.
How to do this, and how the aborted thread can clean up after being aborted is shown here. It may not be apparent that the subthread is aborted in the code below, but the subthread is in fact aborted if the parent thread times out. The ETIF_TestThreadCtrlTimeoutChildBlocking.c is another example of the same functionality, but is designed to test a different aspect of the thread control functionality.